Keeping it going!
This weekend past was at Crieff Highland Games and I was feeling confident but you never know until you get off that start line. As it happened I started well but from there the legs started to fail on me to the point I was just going round at the Deil where I got fifth. So not to bad day with the results considering I was not at my best, the season is coming in to the sprint finish with a few rounds left just hope the legs remember that!

Anyway that was the racing but I had another job on the day with delivering a fixed wheel Dawes mono to a certain Ewan Mcgregor who is a top bloke and is getting right into fixie's.
I even managed to get him to push me off in one of the races! 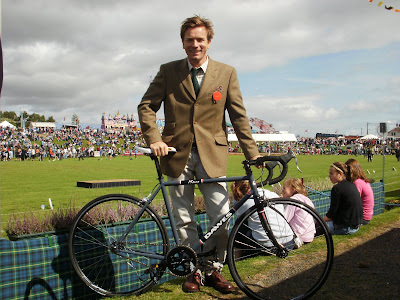 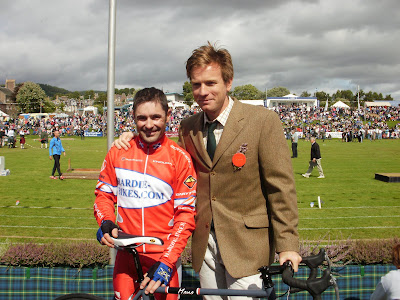 Posted by Hardie Bikes at 10:13 pm No comments:

Scottish Champ
After Inverkeithing we were back on Grass for Perth Games and my legs were feeling good on the day, After winning the first Race I knew that today was on and with the 1000m Scottish champs next I was up for it, as it happened I was pushed all the way to the line by an Oliphant but not Evan this time his brother Lewis, so close was it that the judges conferred and I got it by a tyre width! So three wins on the day and the Scottish Kilo Champs medal not to bad a day! 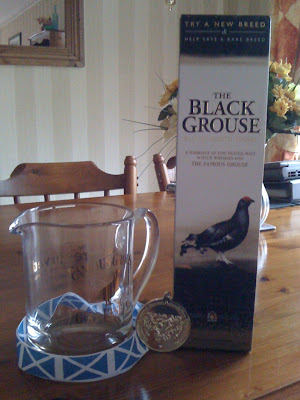 Up to speed
Another double weekend of Games past and the legs came back a bit after feeling like lead last week, I knew after my training in the week that the form was still there from a couple of weeks ago but maybe just tailing off a bit.
Inverkeithing Highland Games is run not on Grass but a red cinder track which makes cornering interesting as the bikes do move about underneath you a bit, the key is to let the bike move and not to be be to rigid, easier said than done once there are 7/8 bikes around you it makes for a few buttock clenching moments! 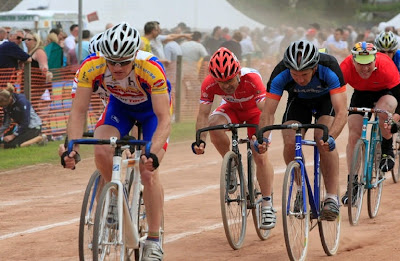 The one race I wanted to win at Inverkeithing was the 6400m Scottish Champs and I was feeling strong but Evan Oliphant got it on the line although I think I pushed him all the way. The other events were good for me but I was a bit frustrated in not coming away without a win on the day.

Bag of Spanners
Wow what a difference a week makes! after getting four firsts at St Andrews Highland games I struggled at my next Games at Bridge of Allan last Sunday.
This week there was a big field of bikes so for the 800m race there was heats with three riders going through to the final, I got drawn in the heat with Evan Oliphant and both of us did not make the final due to our handicaps!
The rest of the races during the day were a slog for me as my legs felt like lead all day, if this is the worst weekend I have it will be not to bad with three third places in the bag.
Bridge of Allan results:
800m - no final
1600m - 3rd
3200m - 3rd
Deil - 3rd

On a good note I was out on a training run tonight and the legs are feeling like they are mine again, here's hoping for some form for Sat - Inverkeithing / Sunday - Perth.
Posted by Hardie Bikes at 11:11 pm No comments: